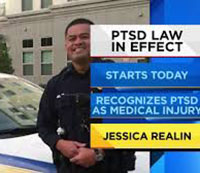 WKMG-TV showed its deeply rooted commitment to public service and epitomizes a broadcasters devotion to positively impacting their community and creating a lasting difference, reads the declaration.