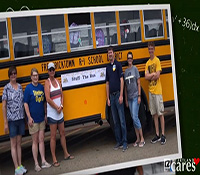 During the annual Stuff-the-Bus event, KFVS partnered with nearby radio stations, Salvation Army and the United Way to collect school supplies for those in need at over 30 school districts. Donations were collected on August 2 - 3 at 19 Walmart locations throughout the viewing area. While promoting Stuff-the-Bus, the station aired PSAs entitled Back-to-School Advice from the Heartlands Best. In the spots, local high school valedictorians offered advice to fellow students.