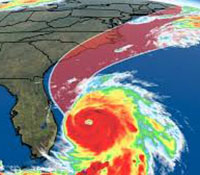 CBS News, NBC News, ABC News and Berkshire Hathaways ABC affiliate WPLG-TV Fort Lauderdale sent reporters to the Bahamas to cover the damage, while also keep eyes on Dorians approach towards Jacksonville, Fla. Deadline detailed the challenges faced in covering a storm that was so difficult to track. iHeartRadio, Entercom, Cox Media Group, Hubbard and JVC were also among the multitudes of broadcasters prepared to deliver emergency information to their local communities.

The Orlando Sentinel highlighted on September 2 the role local TV stations in Florida have played as Hurricane Dorian approached landfall in the state.

In Orlando, we have many fine meteorologists who deliver the information clearly and simply. Thanks for doing your jobs effectively  and were counting on you, wrote Orlando Sentinel columnist Hal Boedeker. Its vitally important television, Boedeker continued. It could keep you alive.