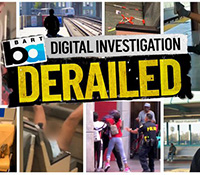 NBC-owned KNTV San Francisco produced a five-part investigative series, Derailed, that exposes how the Bay Area Rapid Transit (BART) system has become one of the most dangerous in the country. The BART system, which with 723 trains, 122 miles of track and 48 stations, sees more than 420,000 rides every day. Violent crime on BART has more than doubled in recent years. KNTVs Investigative unit spent months recording on BART trains, interviewing passengers, questioning top BART officials, and analyzing thousands of crime records to discover what has happened to the once well-respected system.