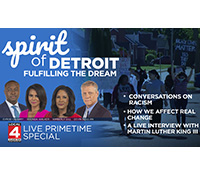 Graham Media Groups WDIV Detroit aired on June 23 a special Spirit of Detroit: Fulfilling the Dream. The live, one-hour program aired on the 57th anniversary of Dr. Martin Luther King Jrs march in Detroit, where he debuted his I Have a Dream Speech. The program is part of the stations commitment to foster discussions on diversity going and to help find ways to change systemic racism.