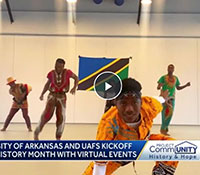 Hearst Televisions ABC affiliate KHBS Fort Smith and CW affiliate KHOG-TV Fayetteville, Ark., featured two virtual events on February 1 held at the University of Arkansas and University of Arkansas-Fort Smith (UAF) in honor of Black History Month. Rodney Roberts, as part of The Innocence Project, spoke to 50 UAF students over Zoom about his story of being wrongfully convicted for a crime he did not commit, an experience that many people of color nationwide have dealt with for years. On the other campus, the Tanzanite Zuzu African Acrobats gave an online dance performance. Both events were intended to spark conversation about acceptance and understanding of a culture and history that may be different to many in the community, and to continue the conversation past the month of February.