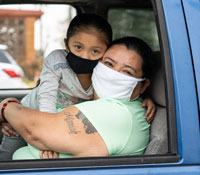 University of Houstons Houston Public Media reported on February 26 on those in the Houston area who were still without water a week after the winter storm. Some in Houstons Fifth Ward still had burst water pipes in their homes that had not been fixed, forcing them to rely on borrowed water and bottled water to bathe, cook, drink, wash dishes, flush the toilet and brush teeth. After the storm that left more than 8 million under a boil water advisory, some communities had not been able to bounce back as quickly even when the notice was lifted, highlighting racial inequities. Volunteer Amatullah Contractor helped coordinate a food and water drive on February 25 in the historically Black neighborhood after seeing the extraordinary need when she dropped off a few cases of water earlier in the week. People just started coming out of their homes because they saw people were gathering around me and they saw that I was holding a water case and they were like, Hey, can we get a case, can we get a case, can we get some water, Contractor said. And it was just like the worst feeling because I only had three cases in my car.