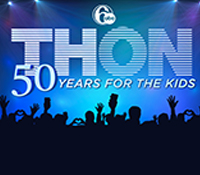 For fifty years, THON has held a dance marathon, now up to 46 hours of dancing, to raise money for children with cancer. The highly popular and successful initiative that began in 1973 has raised more than $190 million. All money raised benefits Four Diamonds at Penn State Health Childrens Hospital, the exclusive underwriter for the broadcast, in Hershey, Pa. The 30-minute special aired on WPVI and its 24/7 streaming channel, and was syndicated to other Pennsylvania markets.

Through our news coverage, we have shined a spotlight on THON for more than 10 years, so it brings all of us immense joy to produce a televised celebration that showcases the extraordinary dedication and accomplishments of these student volunteers, said Bernie Prazenica, WPVIs general manager.