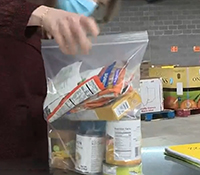 Michigans WILX and the Lansing Brewing Company partnered with the Greater Lansing Food Bank and the South Michigan Food Bank to collect nonperishables during the last week of February for the News 10 Make an Impact campaign.

During the weeklong event, 650 pounds of food was donated by generous viewers at the WILX Studios and the Lansing Brewing Company. The phone bank was manned by volunteers from the Greater Lansing Food Bank and the South Michigan Food Bank. Viewers called in and donated an amazing $8,000 for the food banks to purchase food. The funds raised will provide over 21,000 meals in Mid-Michigan.