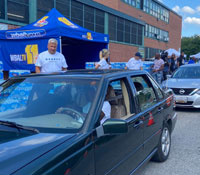 The WBAL team set up its distribution center in the Harlem Park community, an area greatly affect by the E.Coli contamination. This was a great opportunity to reach out to one of our longtime partners and join forces to help people in need, said Jerome Chester, director of Programming and Public Affairs, WBAL-TV.

In all, more than 1,600 cases of water were provided to the community. The WBAL/Safeway water distribution volunteer event was part of HEARST Gives Back, a Hearst Television initiative that encourages employees to support their communities through volunteer activities.