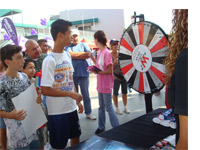 During National Breast Cancer Awareness Month, XEWW-AM in Burbank, Calif., launched a campaign to raise awareness within the Hispanic community. On the air, the Spanish-language talk radio station aired several interviews with cancer survivors and health experts, including Esther McDowell, spokesperson for the Office of Womens Health. XEWW also dedicated significant time to answer questions from its community about breast cancer during Cita con el Doctor, a regular health topic show hosted by Elmer Huerta, M.D., the first ever Latino president of the American Cancer Association. In addition to its on-air support, the station had a presence at events in the community, such as the el Consulado Mexicano Health Fair, where women received free mammograms and the station distributed prizes to attendees.