KOBI Launches In This Together 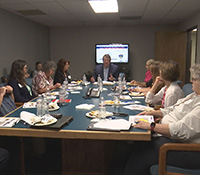 California Oregon Broadcastings NBC affiliate KOBI-TV Medford, Ore., launched In This Together, a two-year long on-air and social media campaign to raise awareness of the suicide epidemic. Every year, over 800 Oregonians die by suicide. Since the campaigns inauguration, KOBI has produced news stories, aired hundreds of PSAs pointing to local suicide prevention websites and has regularly posted information on social media. Vice President and General Manager Bob Wise has also made many public appearances to discuss the signs of suicide and offer advice on how to help.